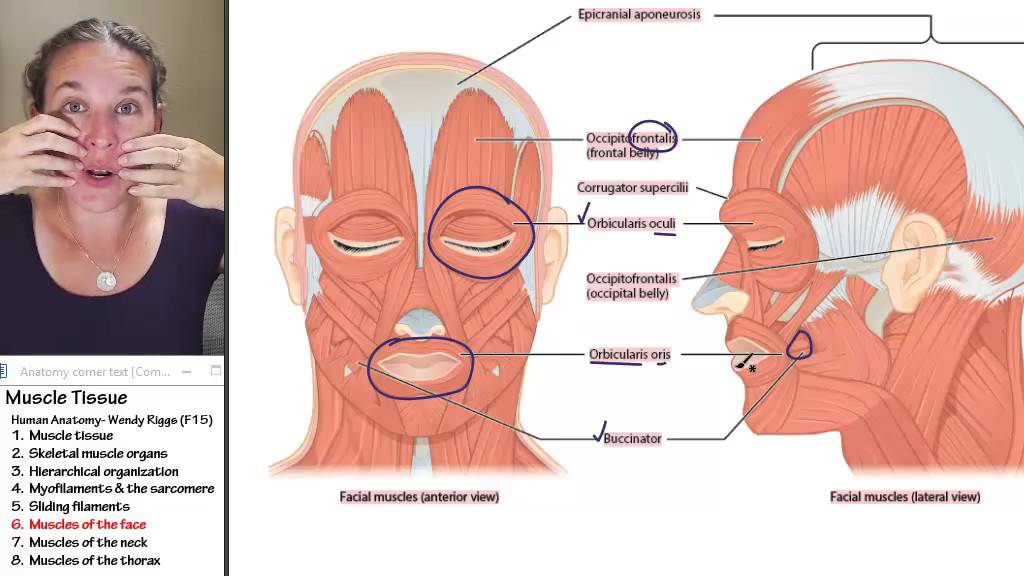 The muscles of the face are essential for eating and speaking, and they give the face a general shape. The cheeks are made up of many smaller muscles, including the orbicularis oculi which helps to bat the eyelashes. Mouth muscles include the masseter, which raises the jawbone to close the mouth, and the risorius, which pulls the corners of the mouth backwards.

The Orbicularis Oris is a sphincter muscle located around the mouth. It is not a single muscle; it contains several strata of muscular fibers that run in different directions. These fibers originate from the Buccinator and other facial muscles. This muscle is supplied by the mandibular and buccal nerves. When it is relaxed, it forms a sphincter, which helps in closing and opening the mouth.

The corrugator supercilii is a pyramidal muscle located posterior to the orbicularis oculi, a part of the face. Its fibers ascend to the arch of the eyebrow and insert into the skin over the middle of the orbital arch. The muscle’s function is to draw the eyebrows together and create a vertical wrinkle on the bridge of the nose. If damaged, it can result in the loss of function of the orbital muscles, leading to corneal dehydration and other facial appearance problems.

The levator labii superioris muscle, also known as the quadratus labii, is a superficial elevator muscle of the face. It originates from the upper part of the maxilla and inserts into the alar cartilage. When used for facial expressions, it acts to elevate and invert the upper lip. This action also dilates the nostrils, creating a snarled appearance.

The occipitofrontalis muscle is a long muscle that extends from the eyebrows to the back of the head. The muscles originate from the dermis of the skin and the subcutaneous tissues of the eyebrows. They are attached to the skull by a strong and flat epicranial aponeurosis. They are also weakly attached to the skeleton. The occipitofrontalis muscle is one of the four facial muscles that control expression.

The risorius is a superficial layer of the facial muscles that runs over the projections of the alveolar processes. This muscle is located between the buccinator and masseter muscles and is separated from the latter by the buccopharyngeal fascia. The facial artery and the superior labial artery pass through the risorius. These findings are important for facelift surgery and are described in the following sections.

What You Need to Know About the Muscles of the Leg

The Muscles of the Back

How Do You Identify the Muscles in My Leg?