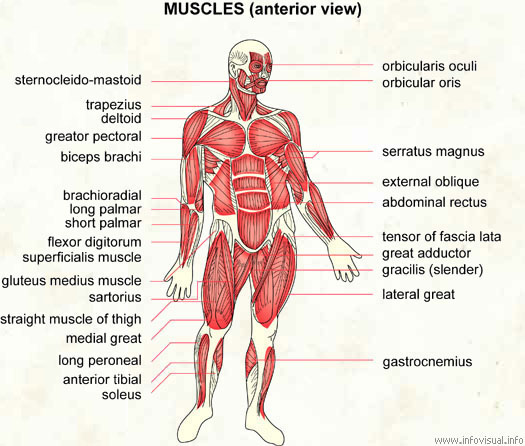 Muscles are the parts of the body that move. They are both irritable and contractible, allowing them to be stretched without damaging themselves and returning to their resting shapes. They will expand and contract in response to work, and atrophy if deprived of work. There are many types of muscles, each with a different role and a slightly different structure. Here are some common examples of each. To begin, let’s look at skeletal muscles.

The skeletal muscles in our bodies allow us to move and perform certain bodily functions, like breathing. These muscles also help protect our internal organs from external trauma. In addition, they help support the weight of our internal organs. Therefore, it is important to maintain a balance between fat and muscle. In general, you should eat a balanced diet rich in protein and carbohydrates. A balanced ratio of fat and muscle is ideal for overall health and well-being.

Skeletal muscles are the most abundant types of muscle in our bodies. They are found in every area of the body, from our arms to our legs. While the skeletal muscles are small and easily overlooked, their important roles cannot be overemphasized. If skeletal muscle tissue is damaged or destroyed, the resulting effects can be devastating. In order to protect your body’s skeletal muscles, you need to know their function and how they are affected.

The heart is comprised of a group of organs called cardiac muscles. Cardiac muscle tissue is highly coordinated and is responsible for pumping blood into vessels in the circulatory system. The heart muscle fibers are similar to those of skeletal muscles, although they are smaller. They also have a single nucleus and contain a large number of mitochondria and myoglobin. Intercalated discs join the muscle fibers together, giving them the distinctive striated appearance.

The heart’s muscular tissue consists of cardiomyocytes. These specialised cells are found in three distinct layers on the heart: the epicardium, the inner muscular layer, and the endocardium, the outer epithelial layer. Cardiomyocytes are much smaller than skeletal muscle cells, and are located in the middle of the heart’s muscular ventricles and atria. These muscle cells have intercalated discs between them, containing gap junctions and desmosomes that allow them to communicate.

Unlike the striated banded muscle, smooth muscle cells lack a striated banding pattern and receive neural innervation from the autonomic nervous system. They contract in response to length and load and use cross-bridge cycling of actin and myosin to initiate contractions. They also contain calcium ions, which serve as initiators of contraction. These characteristics make them unique and allow researchers to study their functions and disease processes.

Although smooth muscles lack sarcomeres, they contain a single nucleus. These muscle cells are part of a complex system that has a very high degree of flexibility. Smooth muscle cells can contract more forcefully than striated musculature, but their structure is highly complex. Actin filaments are stretched between attachment plaques on the cell membrane and dense bodies in the cytoplasm. Intermediate filaments help stabilize the cell’s structure.

The Benefits of Strengthening Your Muscles Back

Understanding the Muscles in the Shoulder

What is the Biggest Difference Between the Different Types of Muscles in the Body?